Posted on May 22, 2013 by Erich - nussbaumerweb.wordpress.com

We planned to travel more than 200km to Blackall, mostly on dirt roads. Forecast was for rain in the area. We wanted to get going early so that we wouldn’t have to travel on dirt roads in the wet. We were on our way by 8:00am.

We were able to travel at good speeds (between 60 and 70km/h) as the road is in good condition. When we reached the top of the Gowan Range, the scenery changed dramatically. We looked down into plains cut out from mountains/hills which were almost rectangular in shape. The vegetation also changed and included much taller trees than south of the range. The road over the range is sealed – just a short section to aid crossing the range.
(Lesley’s Photo)

We could see the clouds hanging low and believed in the forecast of rain.
(Lesley’s Photo)

We noticed this bird not far from the edge of the road. 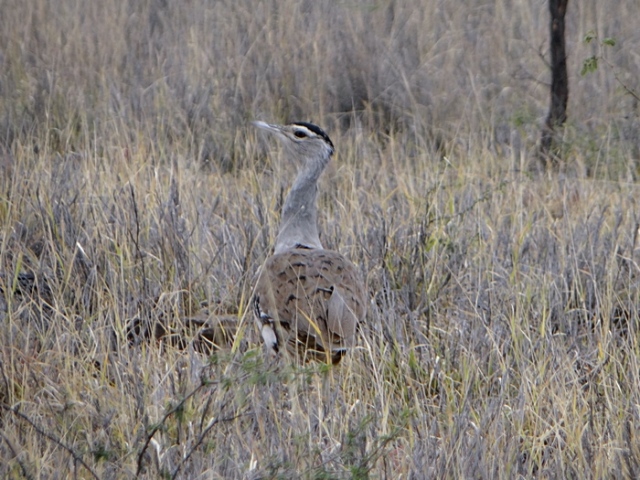 Lesley managed to identify it with the help of her Michael Morecombe iPad Application as an Australian Bustard. 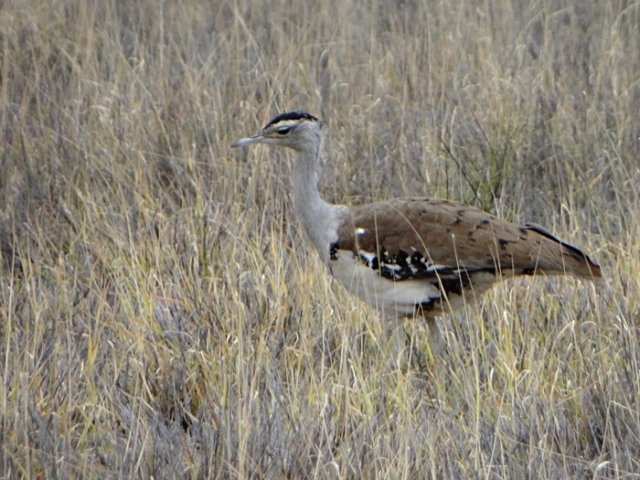 We saw many hawks along the way and we believe we even spotted a couple of wedge tail eagles.

The rain finally started as we approached Blackall. At the information centre we paid our dues for a couple of nights down at the river ($5 per night) [CAW6 QLD #686]. We were given the weather report to read and warned that we might get stuck in the area when the black soil gets soaked with rain. We figured if we get stuck, we just stay a bit longer. We are no longer in a rush and have plenty of time to get to Winton.

Driving into the camping area we had a bit of a drive around, stopped in a potential position and had a walk around. The soles of our shoes were immediately covered in mud and Lesley thought we grew an inch taller. We decided to retreat to a spot on higher ground. We set up camp and walked into town to get a feel of it.

First stop, a Telstra dealer. Our internet router was no longer working. The owner of the shop checked it out and declared it dead. Fortunately he had an identical router on sale for less than half price. For less than $40 we managed to replace the router.

Blackall is a nice little town; it has all the facilities needed. There are numerous sculptures around Blackall. One of them commemorates Jackie Howe, the shearer holding the record for the number of sheep shorn in 7 hours and 40 minutes back in 1892 – 321 sheep. This record was established near Blackall with blade shears. Jackie Howe’s fame also extended to his clothing. In the vernacular, a Jackie Howe is a navy blue sleeveless singlet which is what he is purported to be wearing at the time of setting the record. Lesley vividly remembers her father wearing Jackie Howe singlets for most of his laboring life and they are still a popular clothing item for truckies and laborers.

Another statue honours Edgar Towner, a recipient of the Victoria Cross in World War I for bravery in the battle of the Somme in France. This has special meaning to us as we explored that region of France when we lived in Switzerland. The statue depicts Towner as he receives his uniform, leaving farming life behind and entering the uncertain future of a soldier’s life. As such the statue stands for every man and woman who takes this step to fight for their country. I didn’t take a photo and found this one on the wandering-australia website. I couldn’t see any copyright information and have used it instead.

After our walk we retreated into the van, not to venture from our spot for the day. The rain continued to fall sporadically.

2 Responses to Adavale to Blackall