Along the Dowling Track – to Adavale via Quilpie

Posted on May 22, 2013 by Erich - nussbaumerweb.wordpress.com

The trip up to Quilpie from Toompine was a non-event. All bitumen, a nice and easy run.

We arrived in Quilpie, the end of the Dowling Track having travelled about 860km between Burke and Quilpie, out of that around 760km on dirt roads. Of course this includes our travels into the Curranwinya National Park as well as the travelling on Kilcowera Station. This was our first big trip on dirt – which will continue after Quilpie.

Was it worth it? I would answer with a resounding YES. For me it wasn’t really the travelling along the track that I enjoyed, it was more the experiences we had just off the track. But you can’t have these experiences if you stick to the sealed roads. The chats we had in the Hungerford and Toompine Pub, the campsite in the Currawinya National Park, The Granites, Lake Kaponyee and the emus, camping at Kilcowera Station – all these experiences will stay with me for a long time.

Quilpie is a real service centre for travellers.

We replenished our water at the Information Centre. 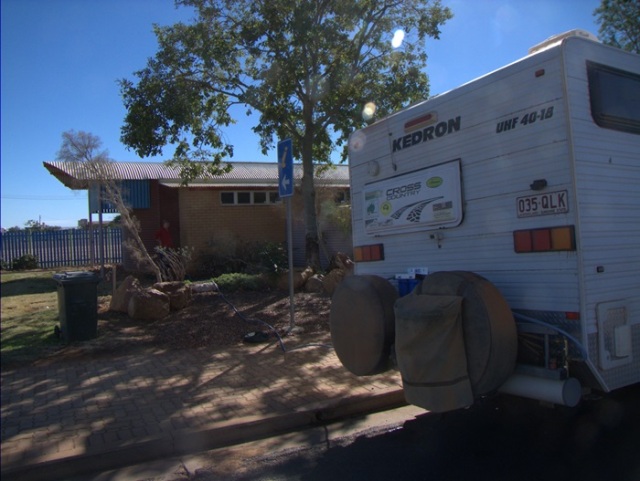 We topped up with diesel at the service station, emptied the cassette, bought a recharge voucher for my prepaid phone at the post office, did some grocery shopping and got out some cash at the National Bank. We were down to a few dollars…

I also enquired about a hair cut. Come back tomorrow, I am fully booked out for today. Well that will not be possible, tomorrow we will be some 200 kilometres from Quilpie, at least.

After a spot of lunch at the bakery we headed out towards Adavale. When we were back on dirt roads, I dropped tyre pressure down to 30PSI from our normal 48PSI when travelling on sealed roads. It makes for a more comfortable ride on corrugation as well as helps prevent the tyres getting punctured. On our way we drove past Lake Houdraman where we spent a few enjoyable days back in September 2012. Check out our posts from our visit to Lake Houdraman.

Not far from Lake Houdraman we came across a couple of Brolgas. They were not dancing, all the same quite a moving experience to see these magnificent birds moving gracefully. Lesley managed to capture some shots of them. 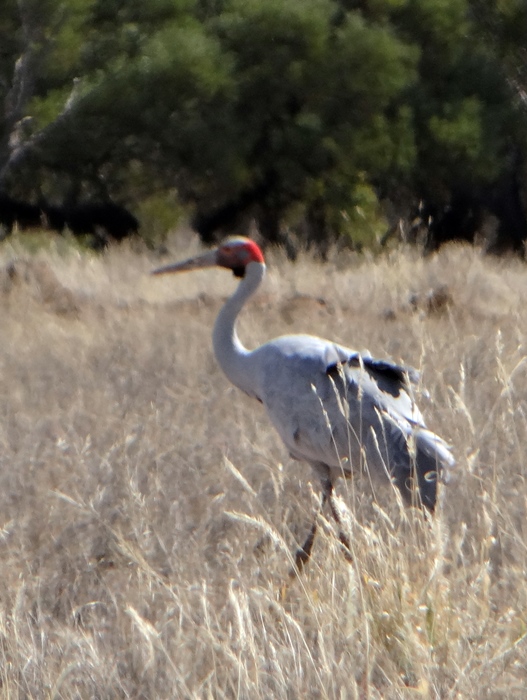 We continued along the Adavale Black Road – quite a good dirt road. All the same it takes more concentration to drive along these roads. I stopped for a bit of a break and took the opportunity to take some photos. This is the kind of roads we are travelling along.

As you can see, the road leads through impressive scenery.

The clouds that form make the view special. 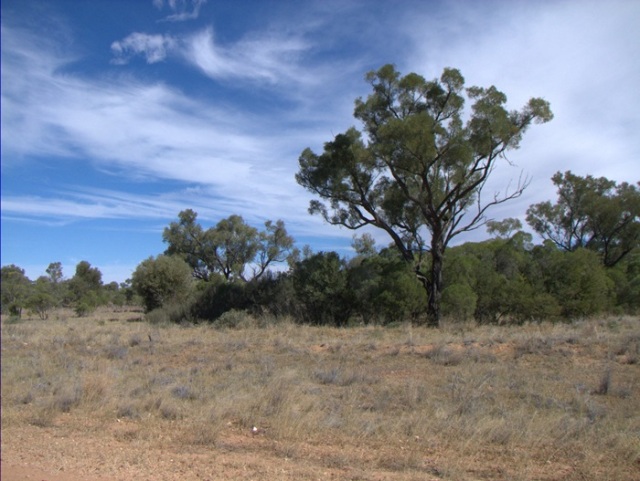 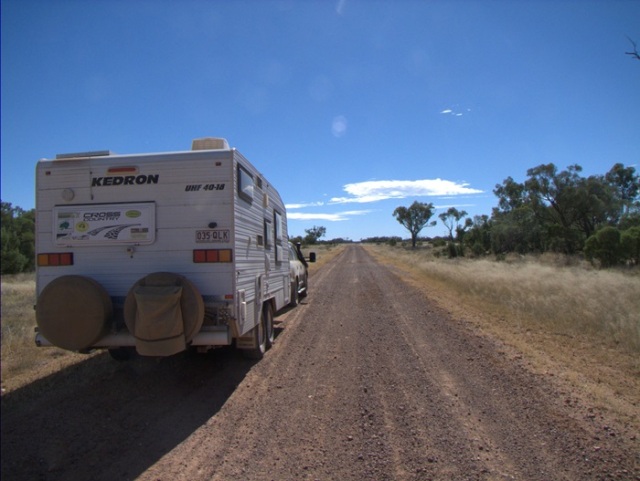 Some more shots along the way.
(Lesley’s Photo) 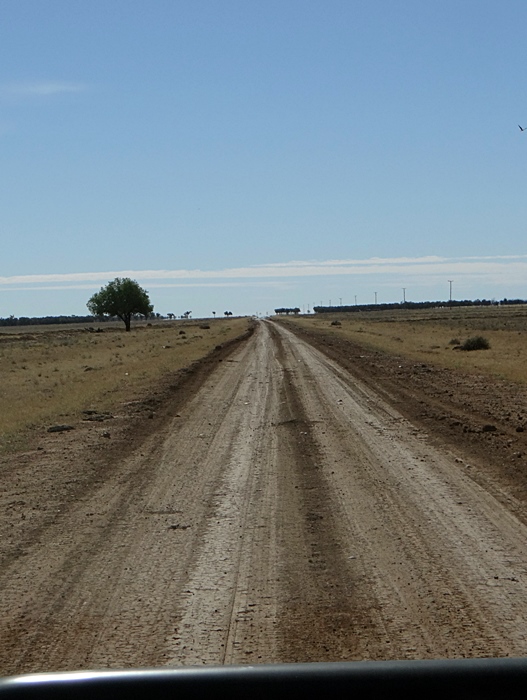 We didn’t meet many vehicles along the way. The vehicles that came in the opposite direction were easily spotted. The clouds of dust gave them away.
(Lesley’s Photo)

We continued on and arrived in Adavale after lunch time. The pub/general store/post office advertises free camping in Adavale. The pub seemed empty at first but eventually the publican greeted us. As a pub, I can’t imagine how it can bring sufficient income to survive. Perhaps the post office props up the pub income. While we were at the pub drinking our beers (Cascade Premium Light), two other customers were served. Both bought chocolate bars. One paid cash, the other had the bars chalked up to his mother’s account.

We explained we wanted a beer and some advice on staying in a caravan in Adavale. Although there is the possibility to camp in town, he quickly established that we would prefer to stay in a bush environment and gave us directions for a spot next to a creek. Easy to find the spot he described, however unfortunately the spot near the creek was not accessible for us as the caravan would have hit some overhanging branches. Maybe a chainsaw would have solved the problem…

Anyhow we parked a few yards from the creek, a good spot all the same. I went for a walk and took some photos. 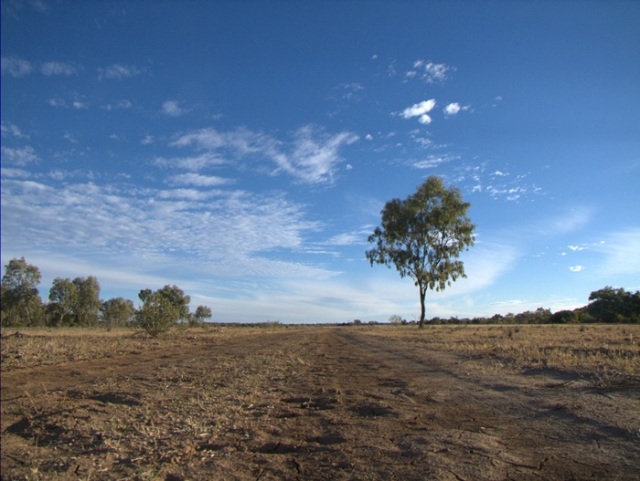 Apparently the creek has yabbies and some fish ready for catching. We didn’t try though. 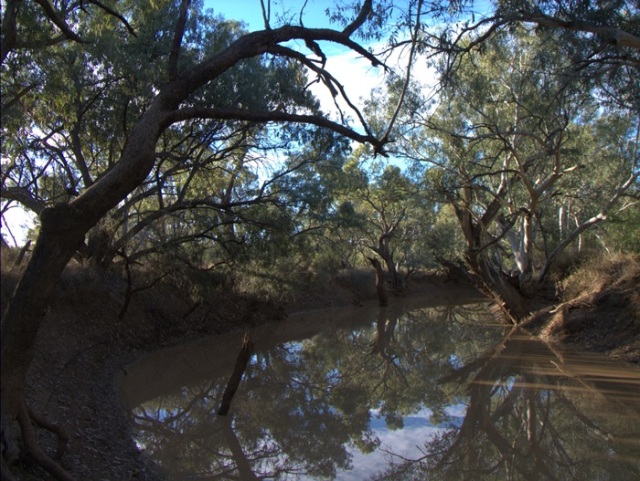 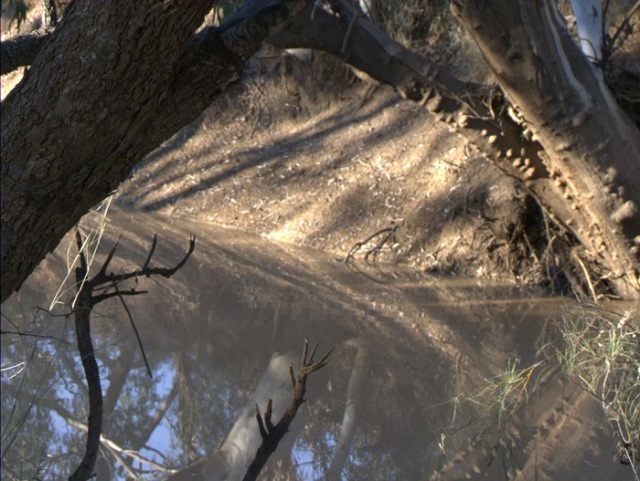 While I was down at the creek, I disturbed a feral cat. The cat rushed off as soon as I approached it. On recollection, perhaps the animal we saw across the Paroo that I mentioned in my post to Currawinya national park via hungerford was a feral cat as well?