We set off at a reasonable hour to head further north to the Pardoo Roadhouse where we topped up with fuel. From there we took the Yarrie Mine Road intending to get to a camping area further up the De Grey River. The dirt road was in excellent condition but not much scenery until we approached the Yarrie Mine Site almost at the end of our drive.

These beautiful breakaways all around.

This motorcycle was the only vehicle we saw on the entire road. 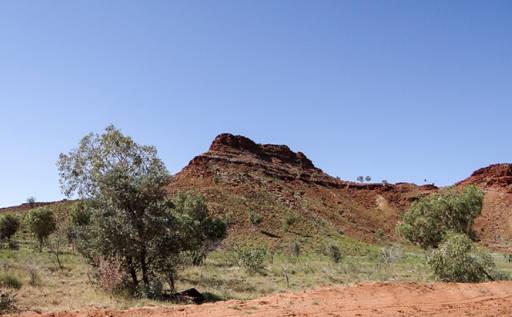 The scenery reminded us of our Great Central Road trip in 2013.

Alas, when we arrived at the camp spot, I could not see a way in for us. The main track had two trees with heavy branches that would not have allowed the van through and a poptop had camped right in the middle of what appeared to me to be the only other entry point. After our experience with the river pebbles at Carawine Gorge, I was not keen to take the risk of driving on them closer to the water. So we turned around and made our way back to Cape Keraudren Conservation Park on the coast.

As it turned out, Kay and Bruce must have arrived at the De Grey river camp sometime after us and must have looked like more agreeable camp companions because the woman with the pop-top moved her solar panels so they could take a line close around the front of her camp and head further up river to firmer ground. We had phone signal there but I thought Kay & Bruce were camping at Doonela Gorge where they would not have had signal, so I didn’t try to phone them to find out what they were up to. I’ll know better next time.

We aren’t really beach people but would have liked either of the two surfside camp grounds which were unfortunately full so we moved around to the boat ramp camp ground where we were surrounded by fisher folk. We didn’t really have a view of the water and it was a calm bay without the drama of crashing waves. Originally we had only planned to stay one night but as I didn’t have the right money for the entry fee and one night of camping, we decided to stay two nights which nicely coincided with the $50 note I had.

As we were setting up camp, a fellow camper advised us which way to orient the van as fierce winds can whip up making for an unpleasant stay. And if the wind doesn’t get up the midgies would be out in force. Neither situation appealed. 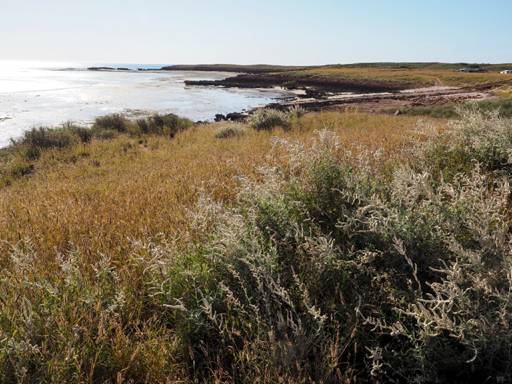 A pretty sunset over the Indian Ocean.

Like Loading...
This entry was posted in 2015 Caravanning trip and tagged Australia, Cape Keraudren, Western Australia, Yarrie Mine. Bookmark the permalink.