Having seen what interested us in Deloraine itself, we decided to take a scenic drive in a loop north to Railton, west past Mount Roland and back east through Mole Creek.

As with many small towns, Railton is attempting to carve a niche for itself on the camping trail. In this case, it is referred to as the Topiary Town with many of the businesses and property owners getting behind the idea and growing topiary shapes in their yards and gardens.

While Skippy was guarding another business. 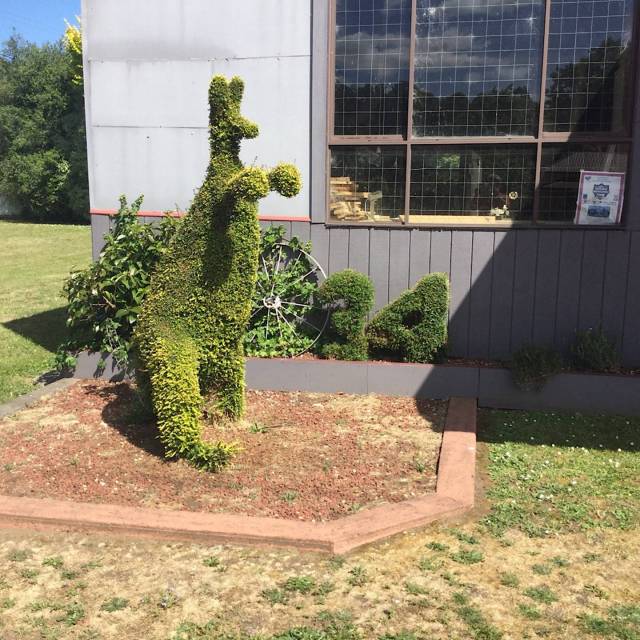 This elephant was in a private yard. 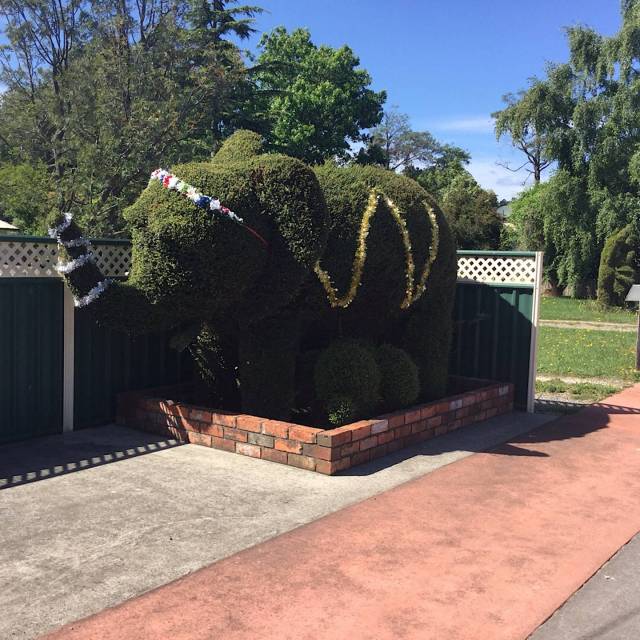 While this lion adorned the Lions Park. 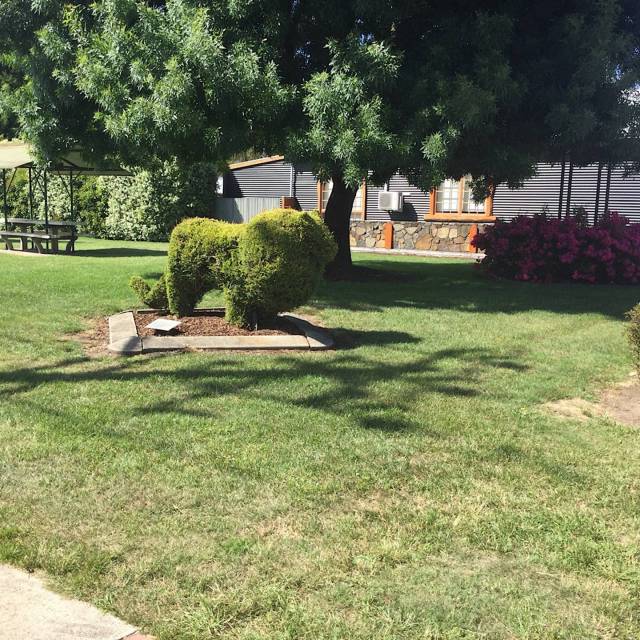 The twisted topiaries lined both sides of the main street. 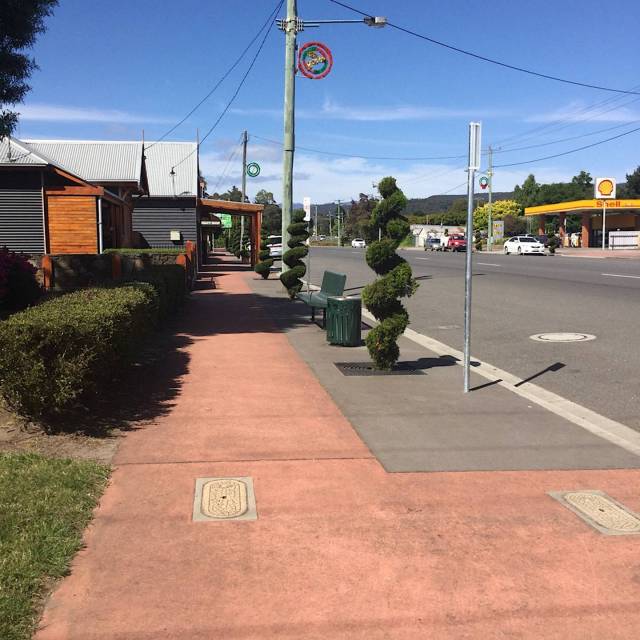 There were also some very good murals decorating the buildings on the main street. 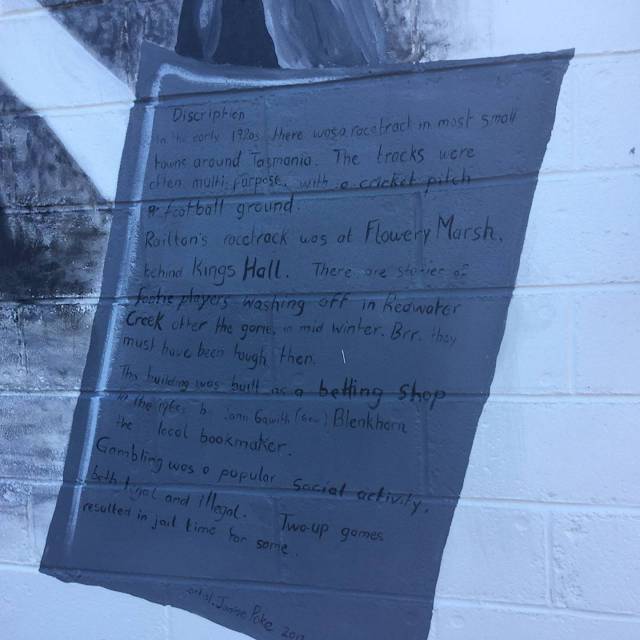 We had a very good coffee in the bakery come coffee shop and checked out the two camping areas provided for travellers. One was free and looked very good and the other, right next door, was for CMCA members only for a $3 nightly fee. It didn’t make much sense to us but we were just passing through.

As we were leaving town, we spotted these “servicemen” at the War Memorial. 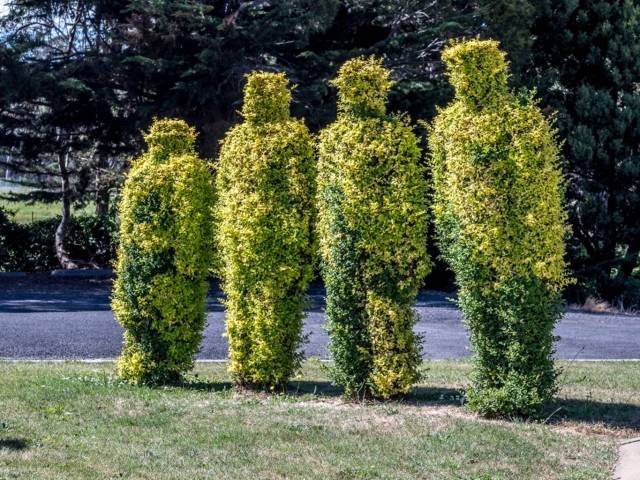 Travelling on, we passed through Sheffield, a town we had visited previously so we did not stop again. Through Gowrie Park where there is a very good camping area overlooked by Mount Roland. From here we began to climb the road that would take us around Mount Roland and then eastwards to Mole Creek and eventually return us to Deloraine. We stopped along the road for Erich to take some photos of Mount Roland. 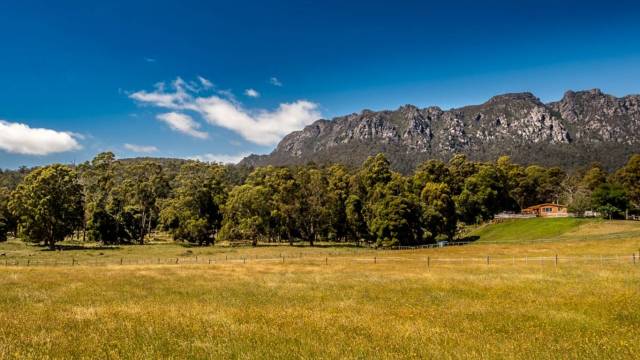 Once we were quite high along this route, we stopped at a lookout for a few photos. 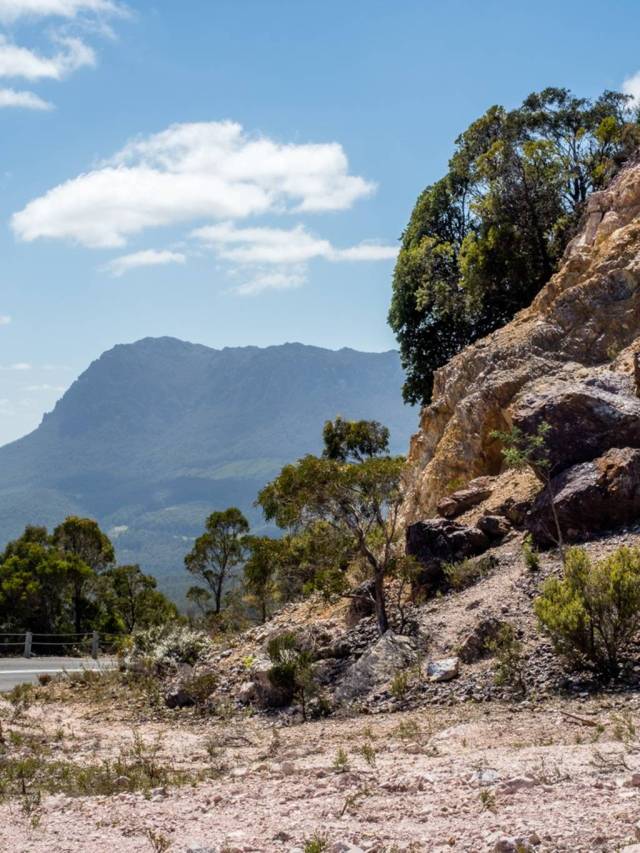 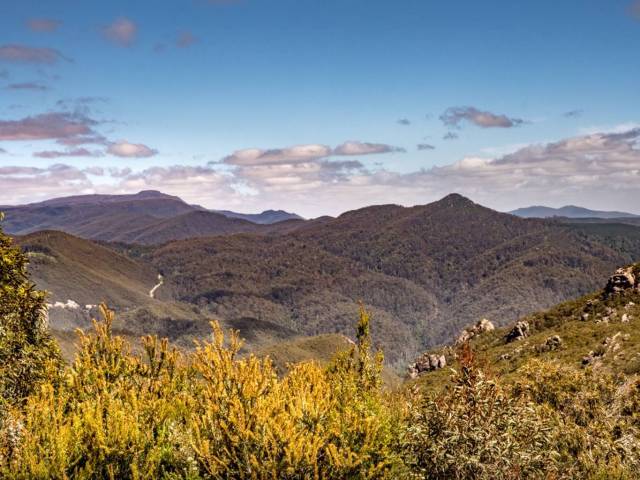 On our descent, we stopped at a pull off area for another photo opportunity. There was a council truck parked there and the driver came over for a chat. He recommended we take the road to Lake Mackenzie just a few kilometers further along and stop at Devils Gullet where he said the views were spectacular.

It was quite a detour but the dirt road was mostly in good condition with almost no other traffic. The higher we climbed the more the landscape resembled a moonscape with mostly stunted vegetation.

At the carpark at Devils Gullet, we were at 1156 metres above sea level. 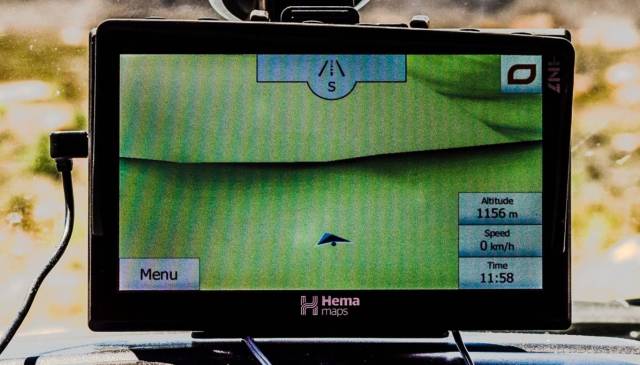 The sign said it was a 40 minute return walk to the viewing platform but it didn’t say what the terrain was like. There had been a major bushfire through the area around 18 months previously and the walking track and boardwalks had been recently replaced. While it was quite a steep walk with a lot of steps, it was very enjoyable. 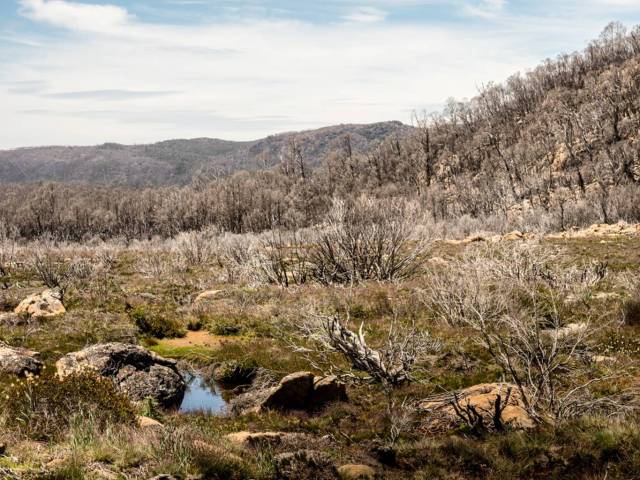 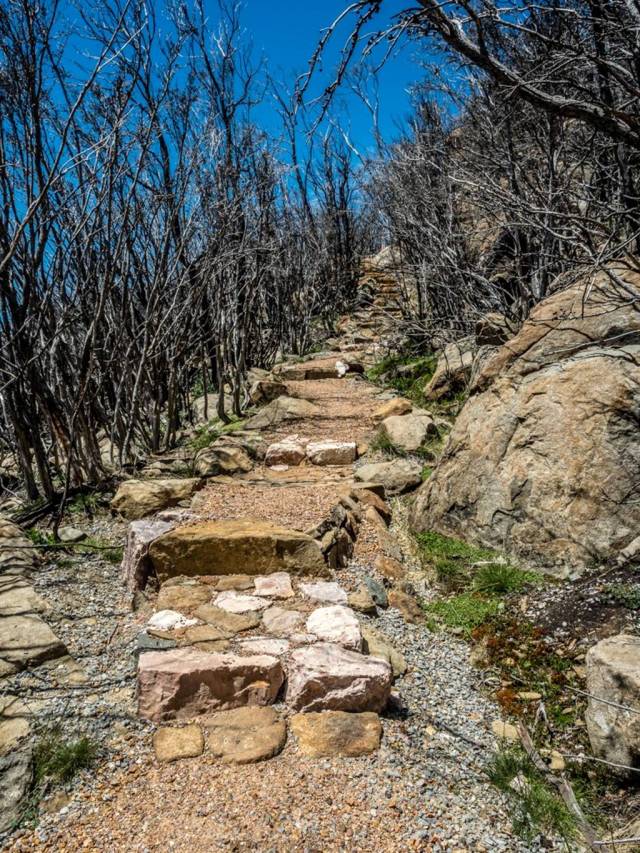 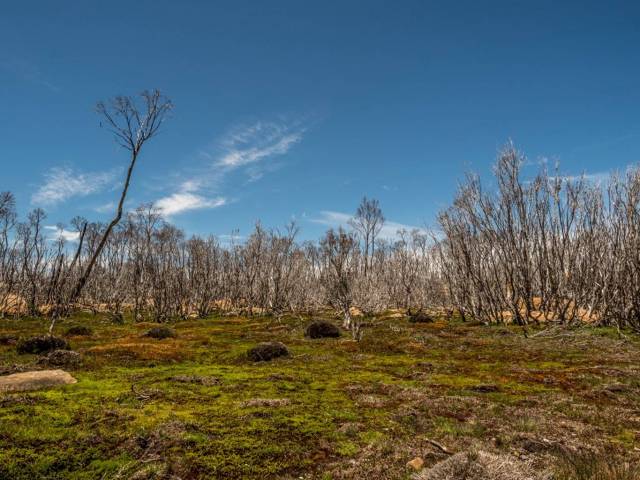 The view from the lookout was indeed spectacular 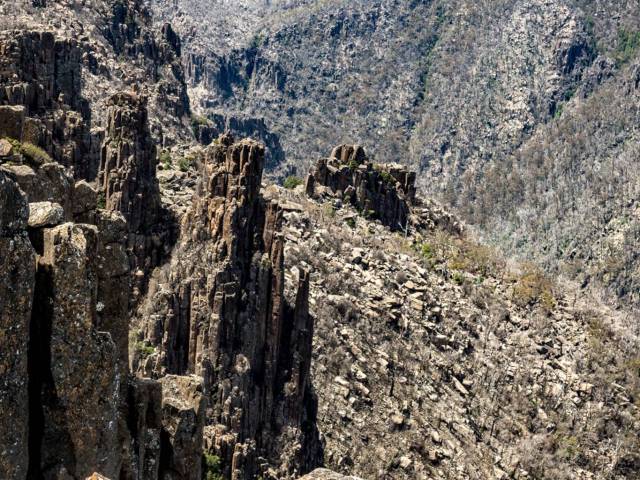 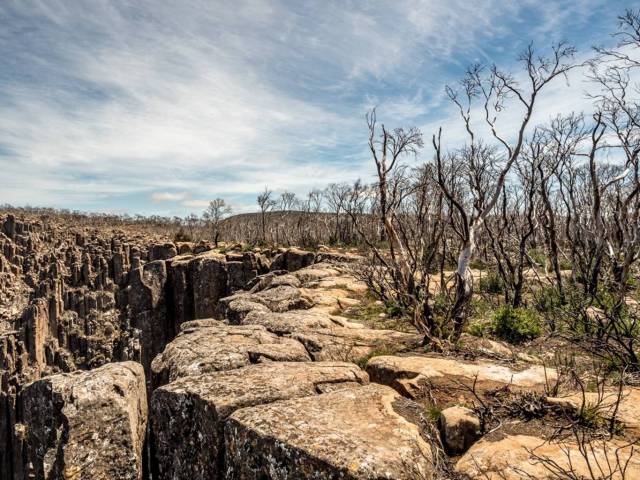 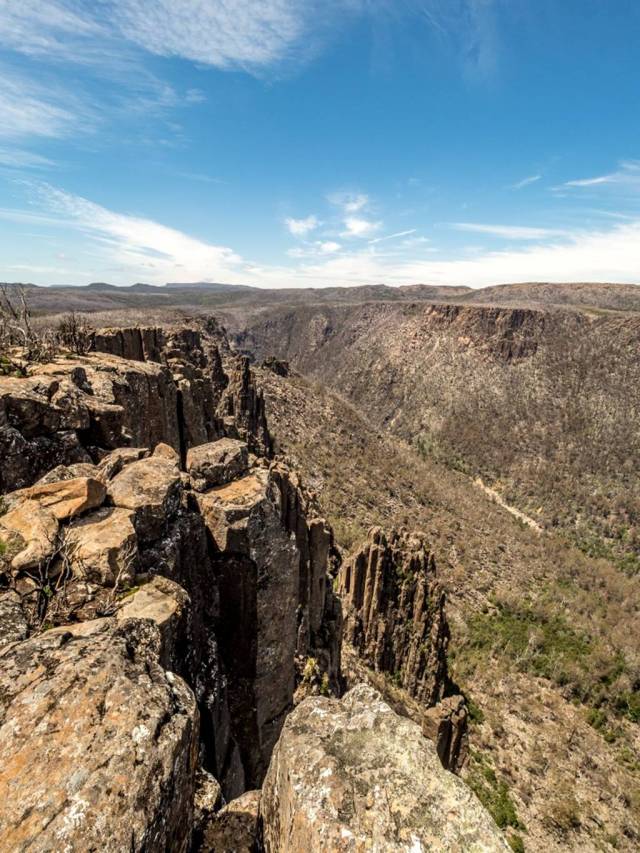 We got back to Mole Creek in time to have lunch at the pub. A bit pricey but delicious. Driving back through Chudleigh we spotted our friends’ motorhome at the showgrounds so we stopped for a quick chat before continuing back to our campsite at Deloraine.

Just to prove that I do occasionally cook dinner, this is our smoked chicken Caesar salad prepared by me.