Continuing our journey further south and east, we set up camp at the Derwent Bridge Hotel which offers free camping in the grounds.

One of the reasons for the stop here was to visit The Wall, a stunning artwork comprising one hundred hand sculpted timber panels one metre wide by 3 metres high created by one man over a period of ten years. Understandably, no photos are allowed inside the pavilion so a photo of the brochure must suffice to whet the appetite of those who have yet to visit. The hand is an example of the intricate work of the sculptor. With a modest entry fee, the exhibition is a must see for anyone visiting Tasmania. 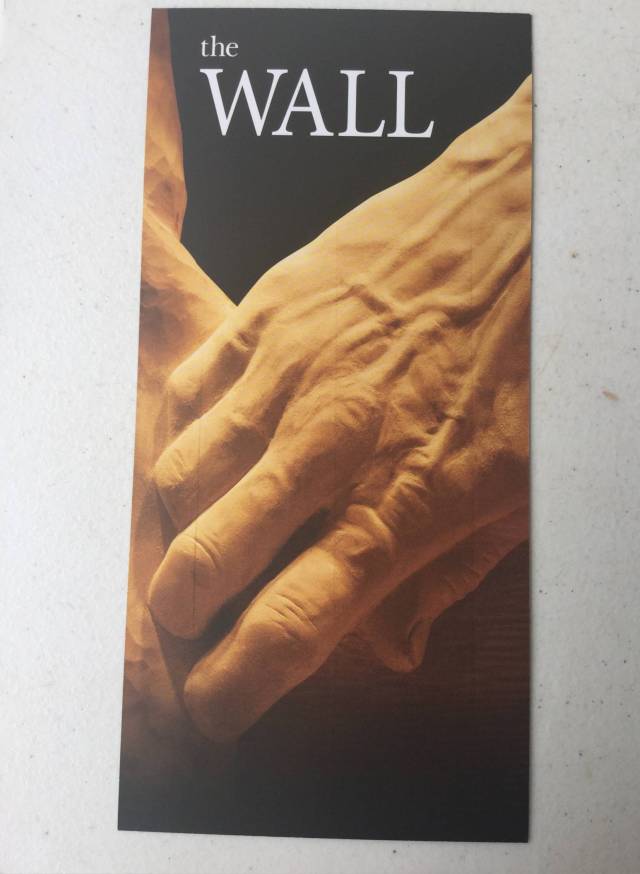 Driving back towards the turn off to Lake St Claire, we came across this echidna strolling across the bridge. Just like in Canada where they stop to photograph bears on the road, so too did we stop for this photo opportunity – just on a smaller scale. 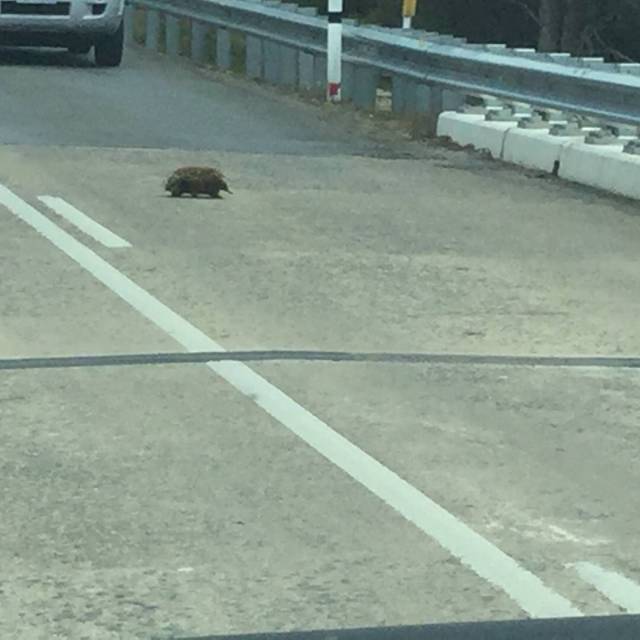 As well as being the deepest lake in Australia, Lake St Claire is also the end of the Overland Track that we had seen the start of at Cradle Mountain. There were lots of hikers sitting around with their packs presumably recovering from their trek. The lake itself is quite pretty. 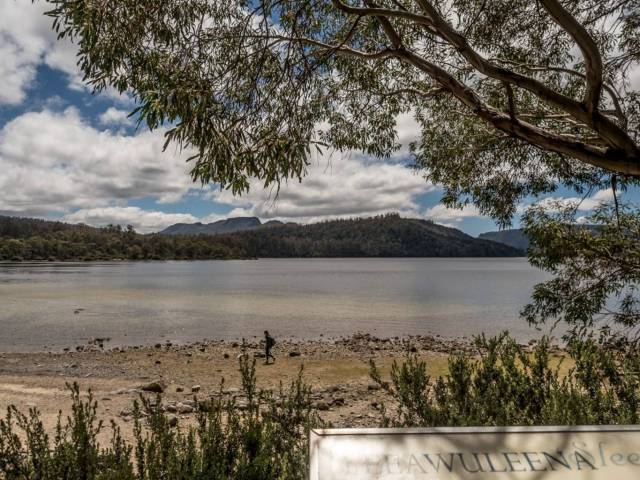 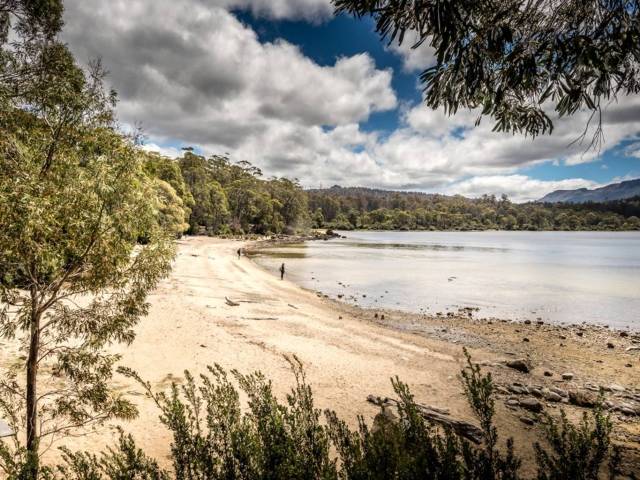 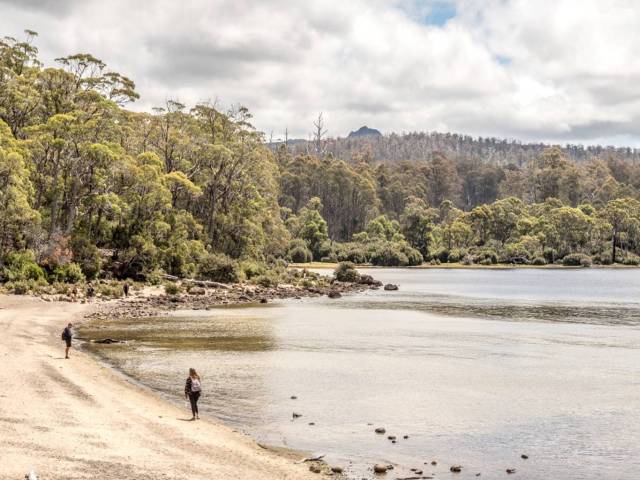 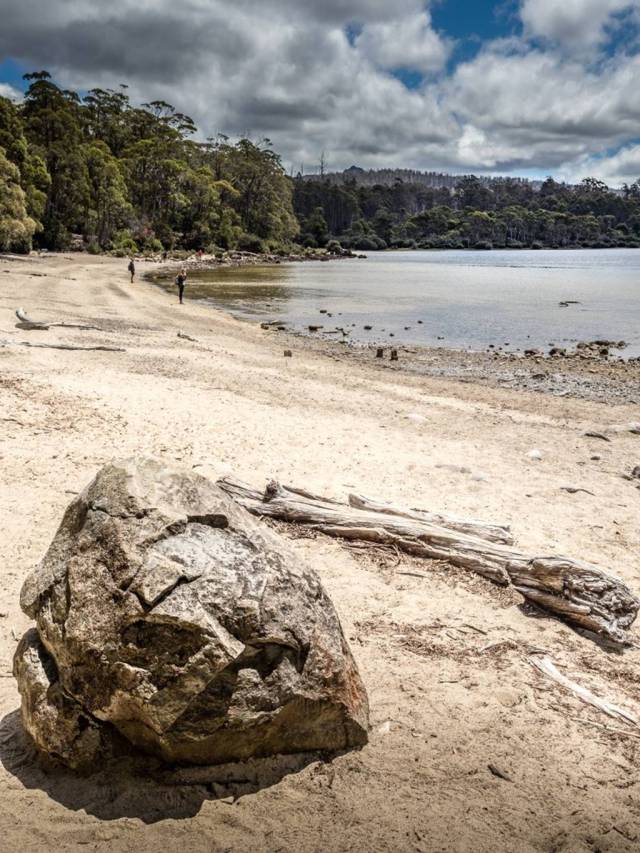 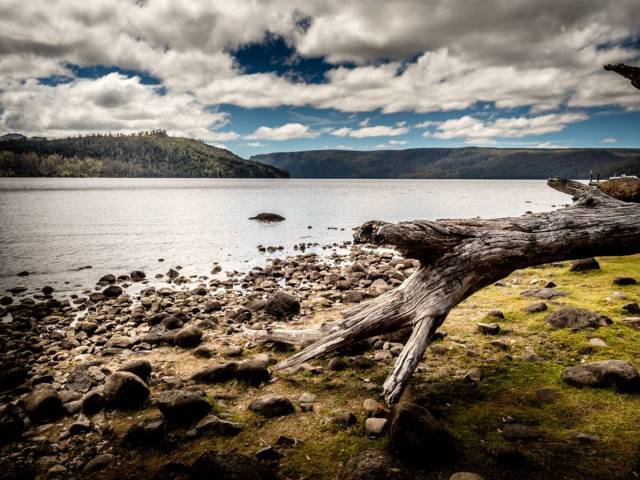 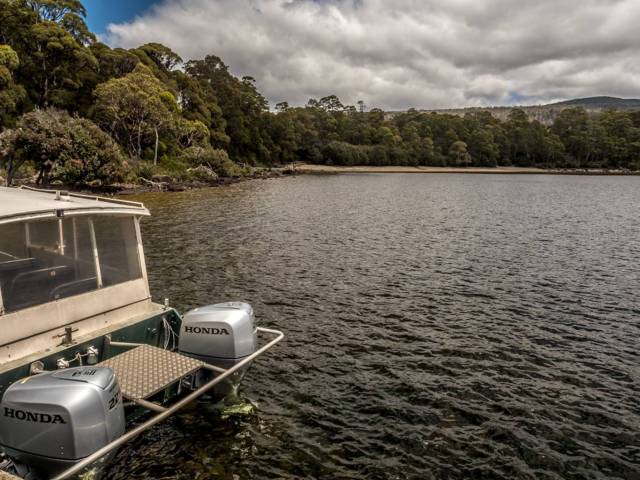 We could see the Pumphouse at the end of a long jetty so decided to try to get a closer look.

After meandering down a dirt track we came to a gate allowing entry only to guests. Back at the van, I Googled the Pumphouse Retreat and found it to be quite an exclusive resort for those who travel in a bit more luxury than us.

We stopped off at a dam across the Derwent River and had a chat to a fisherman and his son who had caught a huge brown trout in the shallow waters below the dam. 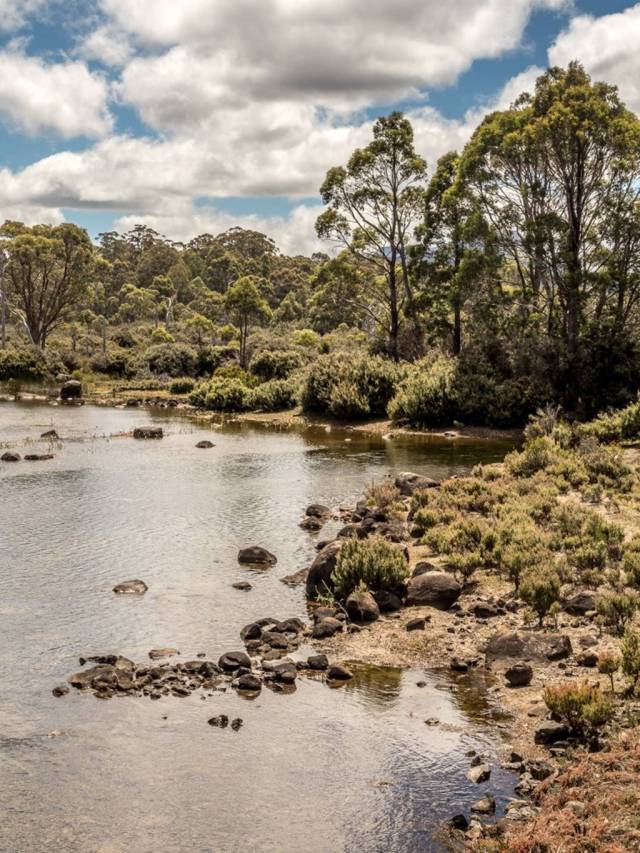 I had heard good reports about the Sri Lankan Chefs at the Derwent Bridge Hotel so it seemed a good idea to make that our dinner stop. Their authentic chicken curry didn’t disappoint both in flavour and presentation. Finding a bottle of Durif was a bonus.

With nothing else to see in the area, we headed further south intending to spend a few days in the Mount Field National Park. I had read good reports about the Left of Field bush caravan park which is very popular. Had we needed a powered site, we would have been out of luck but we scored a prime grassy spot where we set up for three nights. 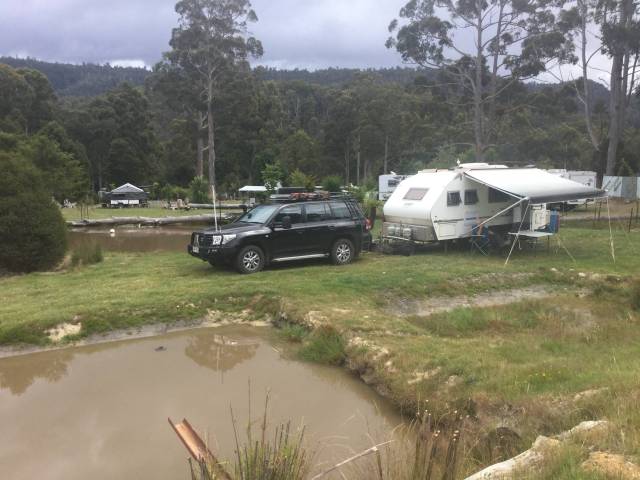 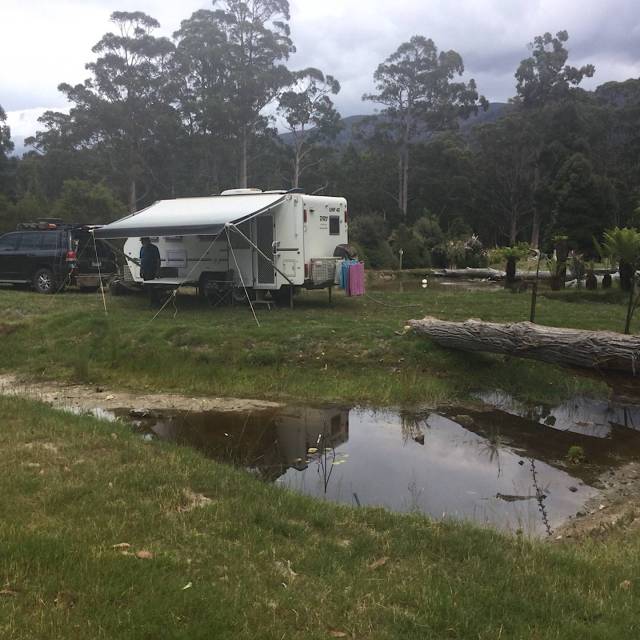 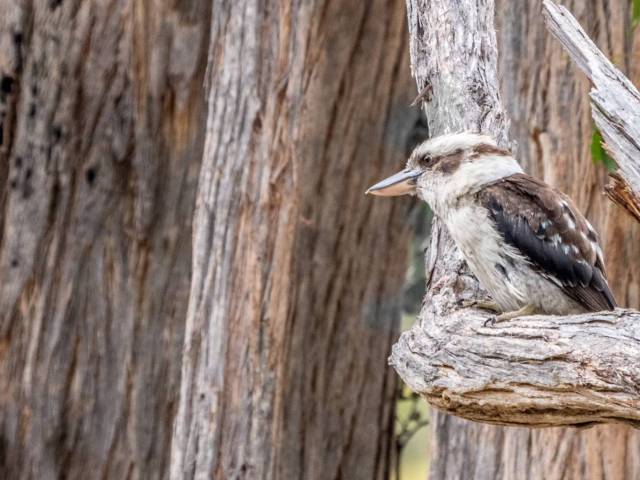 As the camp name would suggest, the owner, Adrian, has a quirky sense of humour and has placed all sorts of paraphernalia around the park to add a sense of fun.

This bicycle stands in the middle of one of the ponds.

A visitor who overstayed her welcome? 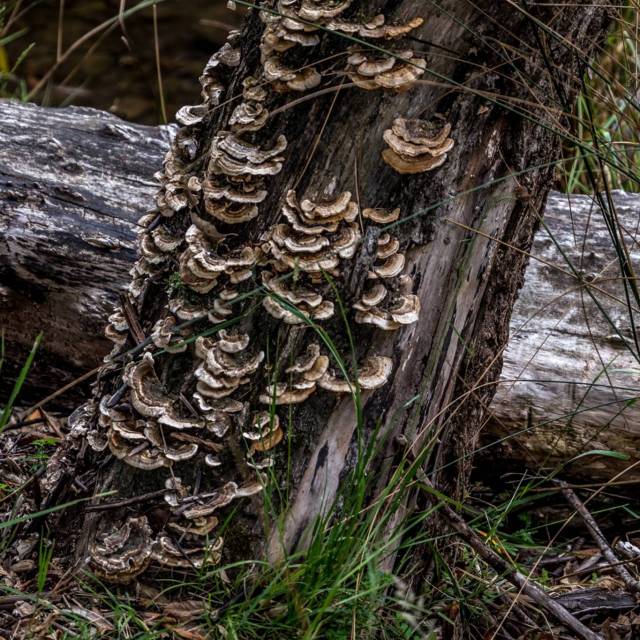 As it appeared that we would have good weather, the decision was made to drive out to Lake Pedder and the Gordon Dam some 75 kms further west in the National Park.

Nice light on an escarpment. 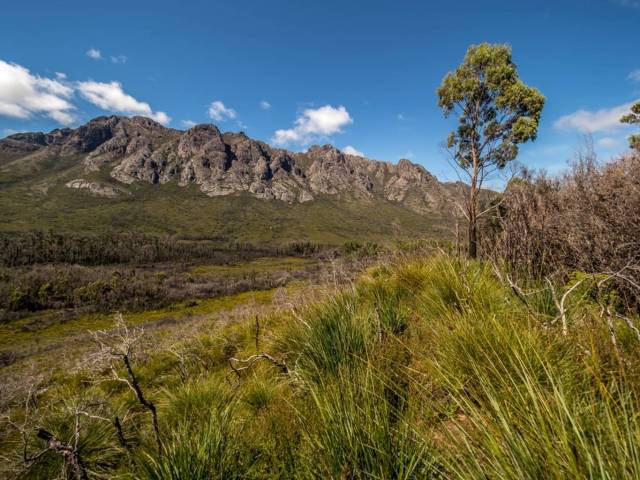 Lake Pedder was stunning from every direction. 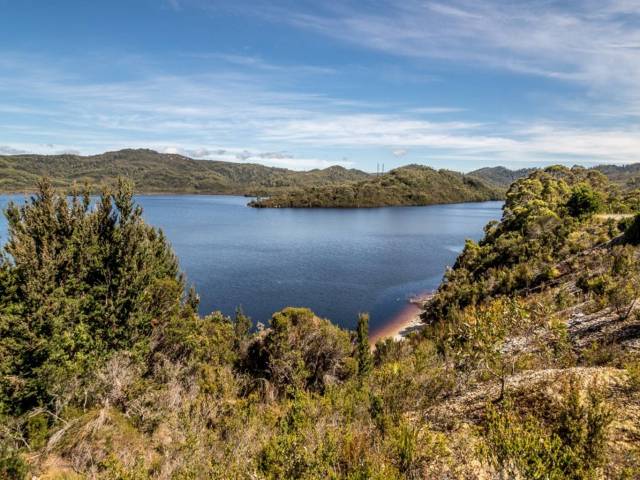 We stopped in at Ted’s Beach to check out the camping area. It was quite full so I was pleased we hadn’t towed the van all the way out there as we would have had difficulty finding a level spot large enough to fit us. 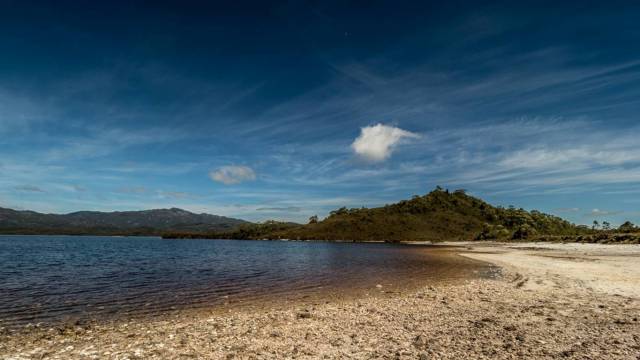 The view of the lake from the lookout was impressive. 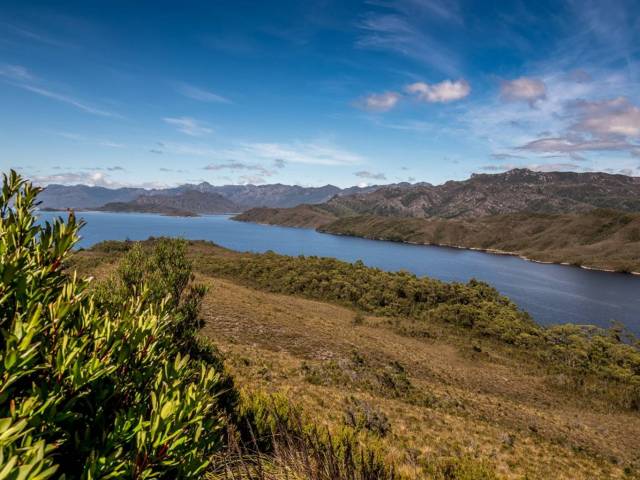 At the end of the road, we came to the Gordon Dam, an amazing feat of engineering. 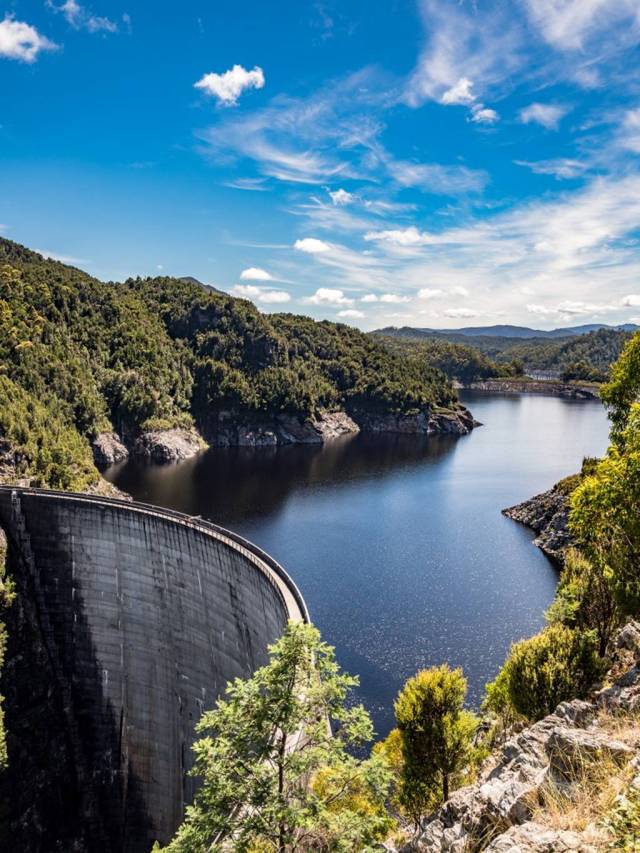 Heading back east, we took a side track to have a look at Serpentine Dam, a much less impressive structure but, I’m sure, equally as important as the Gordon Dam.

Lunch opportunities were scant. In fact, the Lake Pedder Wilderness Resort restaurant was our only choice unless we wanted to wait another hour till we got back to Maydena. Their menu offered a number of light options in a very pretty setting. 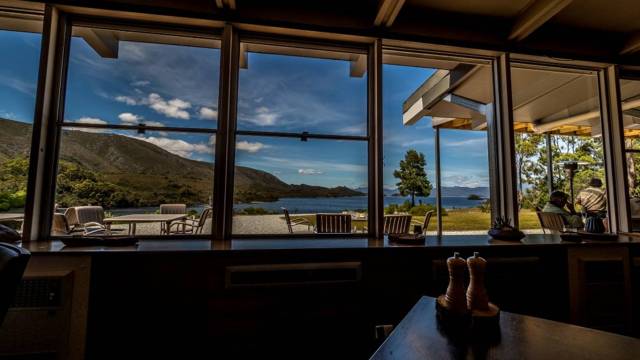 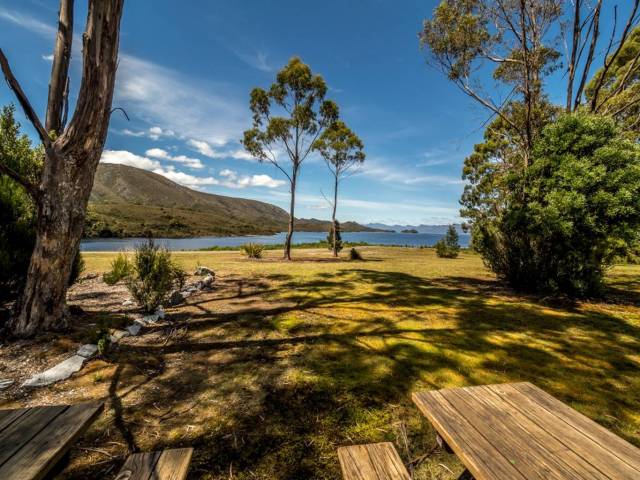 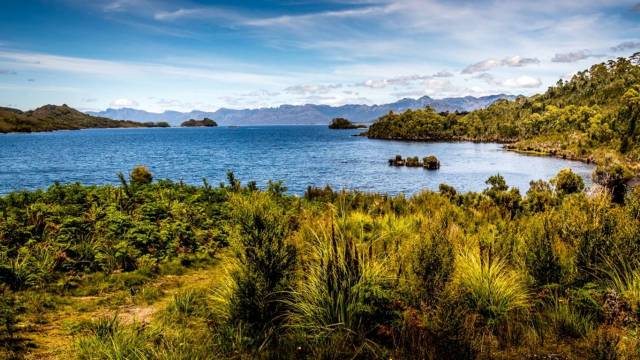 Back at Left of Field, Erich spotted this Yellow Wattlebird. Another first for us, this bird is only found in Tasmania and the Bass Strait Islands. He looks like he had been swimming in one of the ponds.